The U3A Geology Group had its first meeting in January 2017 and has now completed 3 years of group meetings, each one held on the second Thursday in the month.

Through 2017 to end 2018 the group met on 20 occasions. During 2019 the group has met on 11 occasions, once per calendar month, with the exception of July when a months break for summer was held. In 2019 Chris Carlon led 8 of the meetings, the 3 remaining meetings led very competently by Hugh Pihlens, Oliver Steed and Andrew Holmes. This is the planned strategy, to enable more group members to lead meetings, and this will be continued into the foreseeable future. 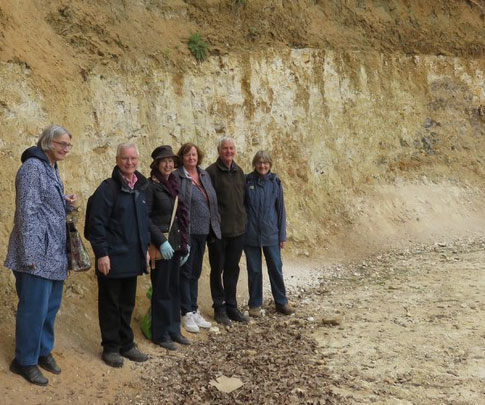 The objective, on setting up the U3A Geology Group in late 2016 was primarily to cover as an introduction, all the main branches of the science of geology. This was successfully done through 2017-2018 with meetings discussing all the main sub-divisions of the subject from Earth's structure and global tectonics to landscapes and local geology. During this period field excursions were made to discover the geology of West Berkshire-East Wiltshire and to the Forest of Dean. The plan in 2019 was to build on this and discuss more applied aspects of the subject. This was greatly helped by the group members settling down to a core of around 15 people.

During the year subjects have ranged across Water Resources and Mineralisation; Regional Geology and Interpretation; Radioactive Waste Disposal; Planetary Geology; Lake District Geology; and the geology of the extractive industries including Mineral Exploration and Mining Geology. In addition a field visit and underground mine tour was made to the Pwll Mawr coal mine in South Wales.

Into 2020 the group interest is still very strong, enthusiastic and enquiring across the subject. Planned meetings will include discussions on the Geology of SW England, SW Wales and British mountains; the Western USA and Russia; geological hazards and climate change. Field visits are planned and some subjects, such as fossils and extinction events will be revisited.

The group continues to meet at Froxfield Village Hall which has been secured at a cost of £6 per hour (likely to rise in April 2020), and the system of funding and payment seems to work very well. Parking is free at the site. Attending Group members contribute as necessary, a situation which permits flexibility to pay the hire costs by those attending while not retaining too big a 'kitty'. Tea, coffee and biscuits are provided at the meetings.

The only support we have required of the branch is the provision of audio-visual hardware i.e a data show projector, the group leaders projector having 'expired' in early 2019.

The Geology Group continues to work well for its members, could accommodate new members if required, but has a good core of enthusiastic and interested people who are more than willing it seems to continue with the subject.